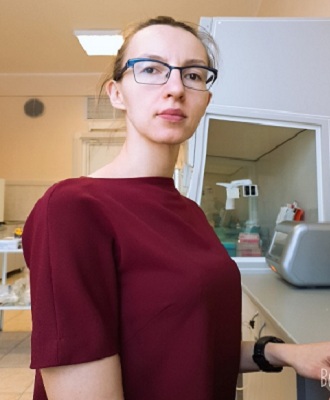 Title : Heterochromatization of a large-scale duplication in 3p26.3 region involving the CNTN6 gene in a patient with neurodevelopmental disorders and intellectual disability

Copy number variations (CNVs) of the 3p26.3 region are often the cause of neurodevelopmental disorders, including intellectual disability, developmental delay and autism spectrum disorder. Recently, a publication appeared with description a patient-carrier of a duplication involving the CNTN6 (encoding contactin-6) gene with manifestation neurodevelopmental and dysmorphias (Kashevarova et al., 2014). The duplication was inherited from the healthy father who inherited it from the healthy mother.
Using standard Yamanaka protocol, we obtained the induced pluripotent stem cells (iPSC) from skin biopsy cells of the patient, his healthy father, and two unrelated healthy donors. The iPSCs were differentiated in vitro in cortical neurons (Gridina et al., 2018). In addition, we have determined the exact boundaries of the duplication and its size was 0.94 Mb. Importantly, we did not reveal any addition structural variations either within the CNTN6 gene or the surrounding region. Despite the fact that there are three intact copies of the CNTN6 gene in in vitro obtained neurons of the patient, the level of its expression was significantly lower than in the neurons derived from healthy donors. Moreover, it was the duplicated allele which expression was significantly weaker compared with a normal in the patient neurons. Surprisingly expression of the duplicated allele of the CNTN6 in the neurons derived from the healthy father was the same as in the neurons of the healthy donors, and expression of the duplicated allele of the gene was higher than the wild allele.
The changes of the gene expression caused by chromosomal rearrangements may be a result of disturbance of the chromatin folding. We performed targeted Hi-C analysis of the region, including the chromosomal rearrangement, and observed higher frequency of contacts of the targeted region with distant sites in the patient cells than in the cells from the healthy donors. The result allowed us to suggest that the region was heterochromatized in the patient cells. The data of Chip-seq analysis of iPSCs derived from the patient and healthy donor was consistent with the suggestion. We observed that the duplicated region contained an excessive excess of H3K9me3 (repressive chromatin marker) and significant decreasing of open chromatin signs (H3K27ac and CTCF). Thus, the obtained data allow us to suppose that the heterochromatization of the region, including the duplication, caused observed decreasing of the CNTN6 expression in spite of the presence of three full copies of the gene in the genome. The significant reduction of the CNTN6 expression in neurons obtained from patient iPSCs can explain the similarity of the symptoms observed for the patients with deletions and duplications of the CNTN6 gene.
This study was supported by Program of Russian Academy of Sciences ? 0324-2019-004 and RFBR grant 18-129-13021.

I’m going to talk how iPSC technology help to modeling brain disorders. I describe the story, which starts from the patient with megabase-scaled duplication and the neurodevelopmental and neuropsychiatric disorders. Through the obtaining iPSCs and in vitro differentiation we make a hypothesis which can explain the similarity of the symptoms observed for the patients with deletions and duplications of the CNTN6 gene.
I guess my presentation point at the unusual consequence of the duplications, which have to be taking into account when researcher move from the patient case to the mechanism of the pathology. Moreover, I will tell about advanced methods (including allele-specified expression and targeted Hi-C) that can be useful and interest for the researchers.

Dr. Maria Gridina studied Biology at the Novosibirsk State University, Russia and graduated as MS in 2005. She then joined the research group of Prof. Serov at the Institute of Cytology and Genetics, Siberian Branch of Russian Academy of Sciences, Russian. She received her PhD degree in 2010 at the same institution. Now she is postdoc at the same institution. The field of her interest is the regenerative medicine, iPSC technology, neurodevelopmental disorders. She has published 10 research articles in SCI(E) journals.